From performance issues at hosting provider Liquid Web to outages at eBay and LastPass, large networks and websites suffered a series of disruptions and outages on Tuesday. Some Internet engineers are blaming the disruptions on a novel technical issue that impacts older Internet routers.

At the heart of the issue, the growth of routable networks on the Internet overwhelmed the amount of memory set aside in infrastructure hardware, typically routers and switches, that determines the appropriate way to route data through the Internet. For the first time, the lists of routable networks—also called border gateway protocol (BGP) tables—surpassed a significant power of two (two to the 19th power or 512K). Many older routers limit their use of a specialized, and expensive, type of memory known as ternary content-addressable memory (TCAM) to 512K by default.

When the tables outgrew the space allotted for them, the routers shut down or slowed.

Hosting provider Liquid Web, for example, blamed an outage on Tuesday on the 512k issue, posting a short statement on Twitter: “As ISP’s have recovered from #512k active bgp routes being reached, many of our customers affected by these carrier issues have regained the ability to reach their sites.” An outage at password service LastPass could partly be blamed on the issue, according to CEO Joe Siegrist. “We suspect the outage was caused by the 512k BGP issue, but we do not have confirmation yet from our provider. There were other factors at play in our particular situation.” 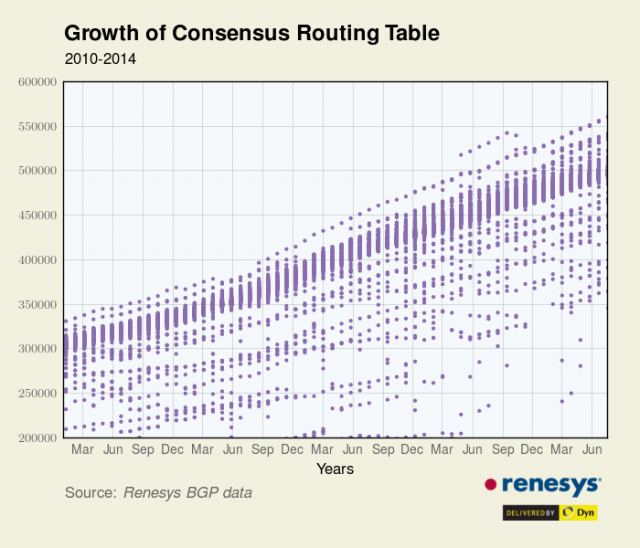